Écrit le avril 18, 2011. Publié dans Behind the scene, How to use light, Photos - All, Photos - Portraits. 4 Commentaires I carry a camera almost all the time. When I go to see friends or have a coffee, I don’t bring 2 or 3 flashes, pocket wizards, and all my camera bag. I usually bring the versatile 24-70, one 550ex flash with a stofen omnibounce to diffuse the light, and the Canon Speedlite Transmitter ST-E2 to fire remotely. I can travel light, but still can take a flash off-camera and create beautiful portrait.

1VAL: Voice Activated Lightstand. Yep, that’s a flash held by someone else that can move the flash around according to your need.

This is not a portrait. I could not set up off camera lights on stands but I wanted a nice off-camera flash light. So I put a flash on a monopod and followed the new Grand Chief of Wendake during a visit by two provincial ministers, underexposing the scene by a stop so the flash would make Sioui pop.

This is my first time experimenting with a technique called “light painting”. I set-up my camera on a tripod and did a 30 second exposure. Armed with my 550ex speedlight flash in my hand, I moved around the ducks and shot a multitude of little burst of flash to light the part that I wanted. Because of the long exposure and the absence of ambient light, I could move freely inside the frame and not appears in the photo, as long as I was not staying at the same place too long.

Next time, I will bring more than one flash. The recycling time was a bummer. With two of them, I should be able to do better next time.

Those ducks are located on a bridge, separating it in two. My camera was less then a foot from the passing car. I’m a happy that no drunk driver passed by!

Drivers where probably wondering what a guy with bursts of light coming out of his hand was doing at night in the middle of a bridge!

Off camera flash… for anything! 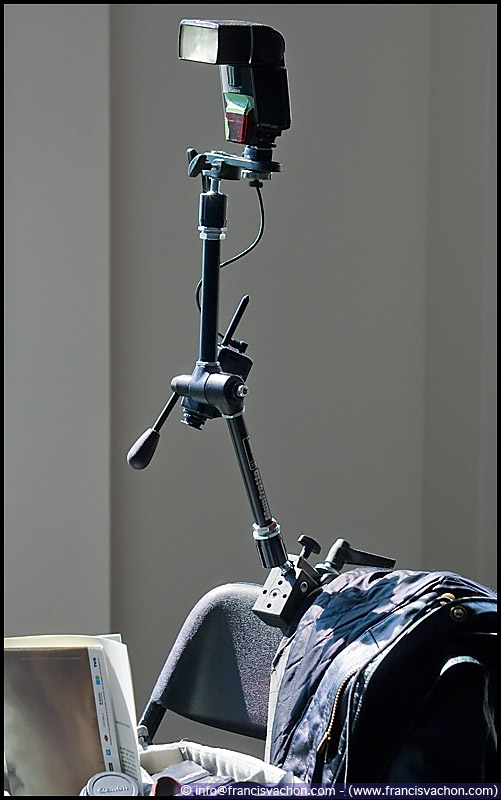 Mastering off camera flash is great for portraits, but why stop there? This morning, I went to a press conference. The kinda-boring-guy-standing-behind-a-microphone talking-to-the-media type of press conference.

I setup a remote flash on a magic arm and a super clamp on a chair, fired thru a pocket wizard. At least, I could say that I got some nice light out of it. Super clamp and magic arm are fun. You can set them up pretty much everywhere, and you can attach a flash or a remote camera to them. The limit is your imagination!

Prepping for the hockey game

Beaupré, February 5, 2008 – Rémy Gravel, an employee of the Beaupré AbitibiBowater pulp and paper mill, laces his skate before the hockey game involving mostly unionized mill’s employees. The mill’s 400+ employees, whose salaries are by far the main economic mainstay of this region, are right now putting together a package of cuts to their wages and benefits, as well as suggestions on how to cut production costs at the mill. Photo Francis Vachon for the Montreal Gazette.
Technical: Canon EOS 1D mark II, 1/40 at f2,8 with a 50mm prime lens- ISO 400, two remote flash (see below)

That is a photo I did this week for the Gazette to illustrate a story on the human side of the forest industry that is on a huge slump in the province right now.

The journalist suggested to take some photos of a local mill employees while they play hockey every week. The photo would be in the dressing room, before the game. Kind of hard to have a stunning photo of a bunch of guys prepping up for a hockey game, but I had to come back with something.

A hockey room is pretty boring, with bad hard light coming from above. That’s the part I could improve.

I did not want to shoot with an on-camera flash. That gives a flat and boring light, and it gives you a ugly drop shadow behind the subject.

How could I setup my remote flashes then if there was not particular guy that I needed to photograph, i.e. I could have to photograph anywhere in the room, wherever “something” was happening?

I setup two remote flash in two corners, bouncing to the wall and 45 degree up at 1/4 power. That allowed me to shoot at a low 400 ISO with a nice light. Depending of whom I was shooting, one flash was acting as the key light, and some other time the other flash did. Ideally, I would have put my flashes in opposite corner, but the configuration of this room did not allow me this.

When you look at the diagram bellow, you see that in in this particular photo, the upper left flash act as the main (key) light, and the other one fills. That is what creates the nice side light.

That is not a portfolio picture, but that’s something I was happy to show to the photo editor. Something that will ensure they will keep calling me back.